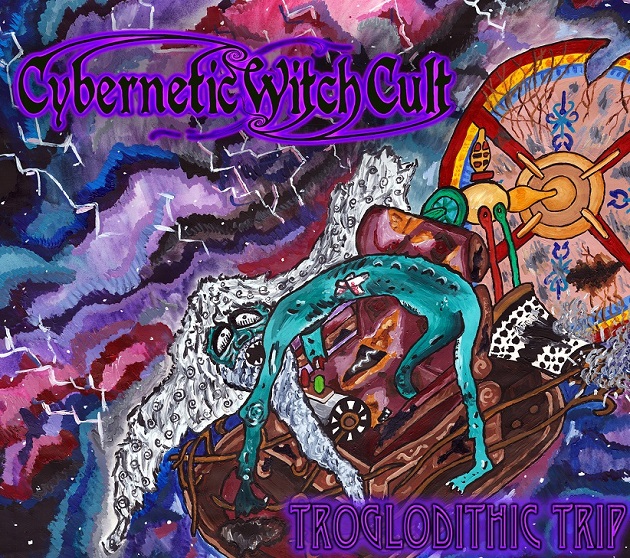 This 3-piece doom/stoner band hails from Cornwall, England and we take a look at their upcoming self-published 6 track fuzzy doomy journey into the science fiction / fantasy world of Cybernetic Witch Cult. It features two brand new tracks and four re-imaginings of tracks from the band’s 2015 album ‘Morlock Rock’, and introducing their new drummer.

Sagittarius A* starts with a jagged distorted riff to pull you into the narrative. This is a classic Space Rock song describing a journey through space. The title refers to the location of a super massive black hole, which is just about the most fitting title for a heavy rock song you could imagine. A Well-crafted engaging song with a lot of changes at the right moments to keep it interesting throughout.

Within a beat Astrogalactic Sprites is in full force, in a intense tale of Cosmic origin of Earth’s Fantasy folk. the guitar solo is a particular delight.

A driving bass is leading in Cult Of The Druid, a more laid-back song with some surprising harmonies. The drums are continuing their work in driving the songs forward, especially when the tempo ramps up halfway. The guitar does a good job colouring in the song with effective riffs and licks. With some added sound effects this is a very well produced track from beginning to end.

Forbidden Fruit‘s Psychedelic Shamanistic intro contrasts with the fuzzed out ending of the previous song. The heavy rhythm and guitars lead into forceful vocals relating a world of cold, ancient evils and lurking monsters. The song has a tribal feel with interesting percussion, an ominous chorus and an overall thick sound. The chanting will continue on in your head after the song has ended, a very effective earworm.

The ominous start of Human mixes Prog with Heavy Rock and sets up a song that explores the nature of being a human with too much knowledge of his past and future to know hims place in his reality. Good to see some Golden Era Science Fiction being referenced.

Tyrannosaurus Hex cleanly riffs into a Heavy romp of Futuristic war in which a Chronomage brings Dinosaurs into the future to fight invading Robots. In an album with strong titles I love this one the best, a great find. The story is told well lyrically and the music compliments it very fittingly, with the by-now familiar thundering drums, driving bass, riffing guitar and confident vocals.

I dig what these guys are trying to do, and I was impressed by the quality of the recording and the overall production. Out of the six songs I was least impressed with Human but the other songs will definitely stay in my listening rotation for the foreseeable future. This is band with a coherent vision and sound that should be headed for great things. Can’t wait to see what’s next.